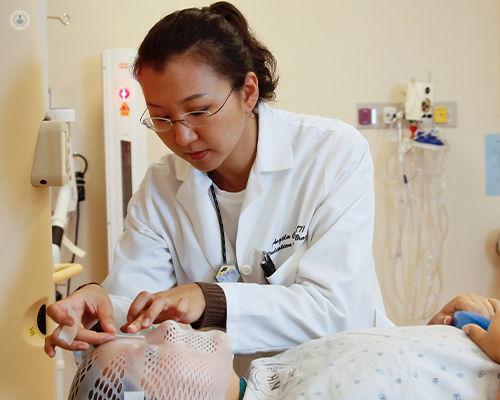 What is proton beam therapy?

Proton beam therapy is a cancer treatment that uses protons to destroy cancer cells and stop the growth of tumours. There is a lower risk of damaging healthy cells.

It is a type of external beam radiotherapy where a proton ray is aimed at a tumour from outside of the body.

Proton beam therapy is less likely than radiotherapy to cause damage to normal tissue surrounding the cancer. It is also different to internal and some external radiotherapy treatments, which use high-energy X-rays instead of protons.

How does proton beam therapy work?

Treatment is given via a radiotherapy machine. A proton ray is aimed at a tumour and passes through normal cells surrounding the cancer until it reaches it. Once the proton beam gets there, it stops and targets the cancer cells by releasing the energy from the protons.

Why is it done?

Proton beam therapy aims to eliminate or reduce the growth of cancers which may be difficult to treat with radiotherapy or surgery, especially those close to important parts of the body like the eyes or brain.

It's also possible to combine proton beam therapy with other treatments such as radiotherapy, surgery and chemotherapy.

Proton beam therapy needs to be planned before treatment takes place. It means that the proton beam can be targeted precisely at the cancer.

Planning is done by a specialist proton beam therapy team. Before the process begins it will be considered whether patients need a mask or a mould to help them stay in the correct position during therapy.

• Small skin markings, which help with accuracy of the position required for proton beam therapy treatment

Who is on a proton beam therapy team?

Specialists in oncology, clinical oncology, radiology and nuclear medicine offer proton beam therapy. A doctor who specialises in specific cancers will also be part of the treatment team that patients have. This approach from multiple perspectives and areas of expertise maximises effectiveness of treatment and works to avoid negative side effects.

Who can receive proton beam therapy?

Both young people and adults can be treated. Proton beam therapy can be better for children, teenagers and young adults because there’s a lower chance of damage to their developing cells and may prevent long-term issues.

Adults may receive treatment due to:

• A difficult-to-treat-location of cancer in the body

• Serious risk of problems caused by side effects of radiotherapy

• A cancer returning after receiving radiotherapy

Care throughout and after treatment

It’s important that patients boost their immune system throughout and after proton beam therapy treatment to assist in avoiding other medical conditions.

A doctor will advise patients about diet, no smoking, cutting out alcohol and being physically active.

Any cookies that may not be particularly necessary for the website to function and is used specifically to collect user personal data via analytics, ads, other embedded contents are termed as non-necessary cookies. It is mandatory to procure user consent prior to running these cookies on your website.