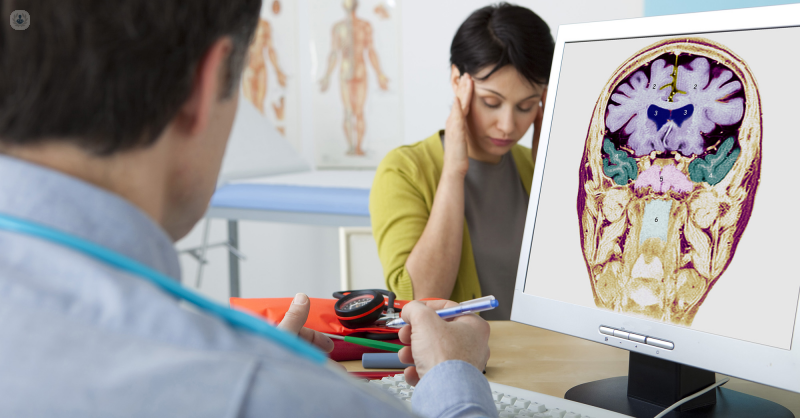 What is a skull base tumour?

Skull base tumours are tumours that grow in the bones of the skull that form the bottom of the head and the bony ridge that sits behind the nose and eyes. They can be one of several types.

What are the different types?

The tumours are classified by type and location. They can originate in the skull base as a primary tumour or spread to the skull from cancer elsewhere in the body as a metastatic brain tumour. The majority of tumours in the skull base are benign (non-cancerous) but there are rare types of tumour that are malignant or cancerous.

The most common tumours found in the front of the skull base (containing eye sockets and sinuses) include:

The centre of the skull base (middle cranial fossa, a saddle-shaped bone structure containing the pituitary gland) is where sellar tumours form:

At the back of the skull base, the following can be found:

How are skull base tumours diagnosed?

Skull base tumours can be diagnosed with a physical exam, followed by a neurological exam to check balance, coordination, reflexes, ability to think and recall, hearing and vision.

Tests used to detect the tumour include:

What are the symptoms of a skull base tumour?

Symptoms of a skull base tumour appear slowly as the tumour grows in size and puts pressure on the pituitary gland, optic nerve and carotid arteries. The symptoms depend on where the tumour is and how big it is.

What causes skull base tumours?

A skull base tumour happens when there is an abnormal growth of cells in that part of the brain that meets the base of the skull. There are no known causes, but researchers have found the following conditions to be linked to the disease:

What is the treatment for skull base tumours?

Depending on the type (benign or malignant) and size of the tumour, treatment may involve a combination of observation, surgery and radiation.

If the tumour is small and is not causing any symptoms, your doctor may recommend observation. If the tumour doesn’t grow, further treatment may not be required.

If the tumour is causing symptoms and is growing in size, then it will be surgically removed. Most patients can be treated with minimally invasive endoscopic endonasal surgery, where the tumour is accessed through the nose and removed without any large incisions being made across the skull and face. Tumours can also be treated through small incisions in the eyebrow or behind the ear, using a minimally invasive retro-sigmoid craniotomy or a supra-orbital eyebrow craniotomy.

Radiation may be recommended after the removal of a malignant tumour or to treat tumours that are in a part of the brain where surgery would be too risky. Radiation therapy can involve either external beam radiation therapy or stereotactic radiosurgery, which uses advanced image-guided software to locate skull base tumours to administer highly targeted doses of radiation to slow the growth of the tumour, without affecting healthy brain tissue.

Any cookies that may not be particularly necessary for the website to function and is used specifically to collect user personal data via analytics, ads, other embedded contents are termed as non-necessary cookies. It is mandatory to procure user consent prior to running these cookies on your website.